Update (May 2010). I updated the benchmarks to include new NVidia and AMD drivers.

I run the tests on two machines:

On each machine I run the tests on two systems: 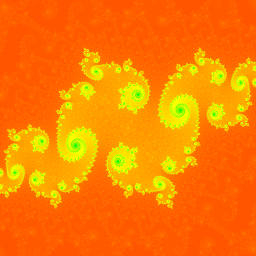 Each test computes a 2048x2048 image of a specific site. Code is either multithreaded C (C x8 means "8 threads"), or OpenCL. In the tables, DNF means "Did Not Finish", either system freeze or driver timeout, and TBU means "To Be Updated", as I did not run the tests with the latest drivers. The green (resp. red) cell for each site highlight the best GPU (resp. CPU) time.

Here, the C code is the code described in Fixed Point Reals. This code is not optimized, and could probably be accelerated using SSE extensions. The OpenCL is described in fp128 for OpenCL.

Comments on the benchmarks 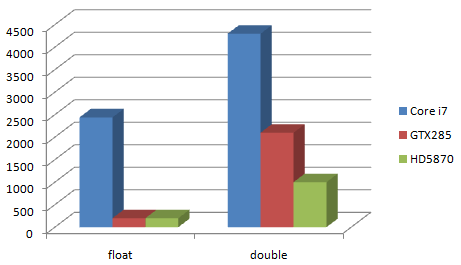 We see here the excellent performance of the GPU hardware float units over the CPU. For the most intensive computations (Julia Island), we have a 12x speed ratio between the fastest CPU and the GPU's in single precision. In double precision, the HD5870 is 4x faster than the CPU, and the GTX285 is 2x faster than the CPU. For fp128, we get a 4x speedup over the CPU for the HD5870, and 2x for the GTX285.

Note the nice performance of OpenCL running on the Core i7. OpenCL provides a credible alternative to more demanding programming options (threads, SSE).

The fp128 running times depend significantly on the choice of the subdivision parameters: number of kernels, number of threads, and workgroup size.

Let's conclude with some general remarks, keeping in mind they are based only on a very small set of benchmarks and in a single application: take them with a grain of salt...